How the Public gets FLEECED and NOTHING gets done

Have you wondered about the NUCLEAR OPTION?  It is JUST a house rule that won't allow certain bills to come to vote unless there is a "super-majority" or 60% majority that will support it. Not the "majority" or 51% but nearly 2/3 of the Senate !!  Contacts at 2yonder.com for use of graphics and permissions. 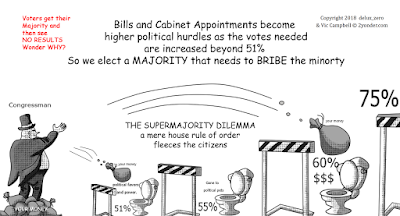 So, if you had a great political season and changed out the majority by a small margin and hoped this would bring relief to areas of legislation you support ...think again. Our congress must now bicker with the minority to add massive costs to other pet projects and pork to win over a few more votes ...  at great cost to the taxpayers.

It is a dilemma because Congress (similar rules are in both houses) is AFRAID of the voters who might actually end up forcing issues at the majority level. It means, when the OTHER party is in the majority, THEY TOO can act on the voter's wishes.  Voters then become more aware of who is the problem. The issue is cloudy when either side when in the majority can point to a nebulous ruling that lets the minority blow up the bill.  If the ruling is NOT THERE... the congressmen in the MAJORITY are exposed to voters. If they fail now... then the voters can see clearly who is at fault and can easily see why they need to change out representation in the next election.

YES - the NUCLEAR OPTION (removing the super-majority ruling except for such things as constitutional amendments) is a two edged sword. But the result will be more congressional response and more efficient cost of bills, and more voter awareness.  Watch the  Supreme Court fight.  It is all about a majority that needs to destroy people - not about the ethical standards of the judge. 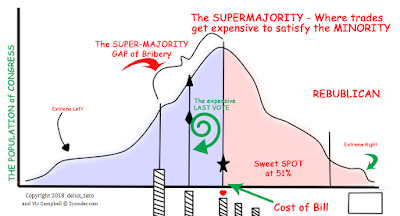